Gulf Medical previously used Cumulus Linux for PoE access switches at hospital and clinic customer sites, but over time developed some issues with the Cumulus access switch quality. Additionally, the NVIDIA acquisition of Cumulus made future support outlook uncertain. Gulf Medical took this opportunity to evaluate other vendors for upgrades.

Gulf Medical began upgrading Cumulus Linux with Pica8 PicOS Software Switches on Edgecore PoE switches in a hospital site with five floors and 4 switches per floor. The switches needed to support Medical IT with the Healthcare Information System (HIS) whereby every floor has a medical device that sends notifications including Artificial Intelligence (AI). The system works with Medtronic to install all devices with Medtronic and HL7 with medical device access. All of these devices are moving to PicOS. 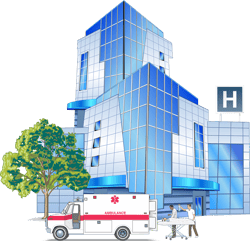