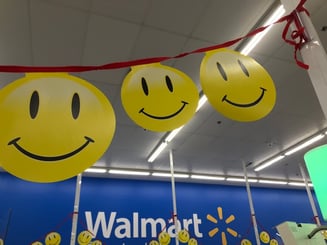 Want to catch the latest in open networking? Head to your local Walmart store.

It appears Walmart has bought into open networking in a big way. The company recently joined LF Networking, the collaboration ecosystem for Open Source Networking projects that is part of the Linux Foundation.

Those comments were echoed by Subhadra Tatavarti during her (virtual) appearance at the Open Networking & Edge Executive Forum 2021. Now with Wipro Ltd., at the time of the conference Tatavarti was Sr. Director Technology Commercialization at Walmart. She made it clear the move to open source was driven in part by the pandemic, which accelerated a trend that had already started: more traffic at the network edge.

Traditionally, the bulk of Walmart transactions were in-store, not online. “What Covid has done is completely flip it for us. We’ve seen up to a 76% increase in e-commerce traffic,” Tatavarti said. (Many other companies experienced the same sort of change in traffic behavior, as I wrote about previously.)

The increase in online activity was accompanied by another change in customer behavior. “More and more customers were buying online but picking up in store,” she said. In essence, stores were becoming fulfillment centers, which drove the need for additional technology in-store, such as for customer check-in and supply chain.

Like many enterprises, Walmart has been adopting a hybrid cloud strategy. The company has 1.7PB of analytics data in the cloud for example, and its check-out applications are also cloud-driven, Tatavarti said. Over the past few years, the company has also been investing heavily in artificial intelligence (AI) and machine learning (ML) applications to drive operational efficiency.

In thinking about the company’s edge strategy, Walmart had to decide which workloads would be hosted in the cloud vs. at the edge. “Workloads that can be deployed on edge are those that require low latency and fast compute,” she said. “Workloads like AI and AR/VR [augmented reality/virtual reality] need a fairly robust edge platform.” The same goes for video security systems and AI/ML-driven inferencing engines.

This should sound like a familiar story. It’s been Pica8’s position for some time that the explosive growth of enterprise applications like AI/ML, IoT, Digital Health and Smart Buildings has overrun the ability of big networking-iron infrastructure to adapt to a distributed workforce/customer environment with Wi-Fi 6 as the last mile. Covid’s redistribution of the workforce has simply moved the problem to the top of the heap.

But the way Walmart addressed the issue should give comfort to any company that has been considering an open source approach to networking – and other infrastructure.

“It’s almost impossible to run an extremely large organization without the latest, greatest technology,” Tatavarti said. Which is why Walmart is a “huge consumer of open source technology,” including Node.js, OpenStack, Cassandra, Hadoop, and the Cloud Native Computing Platform.

She’s right, of course. The beauty of open source software is that it’s constantly being updated, thanks to the contributions of the open source community. By adopting open source software, you’re basically taking advantage of the expertise of engineers at hundreds of large companies, like Walmart.

What’s more, with an overall open networking strategy, you don’t have to wait for the next release from a legacy vendor in order to take advantage of the “latest, greatest technology.” With disaggregated networking, you can update your network operating system whenever it makes sense to do so from a feature/function perspective, while continuing to make full use of open source tools like Ansible, Puppet and Chef. The same also goes for the underlying network hardware. In terms of technology, that can put you months if not years ahead of legacy vendors with their outdated hardware and software upgrade schedules.

Walmart has a GPU in every store to support security applications, payment and checkout systems, including self-checkout, all of which are highly sensitive to latency. The fact that the company is using open source edge network technology should be seen as a vote of confidence in open networking.

And adopters will stand to benefit from the work Walmart is doing. One example Tatavarti cited is eBPF, which enables programmability within the Linux kernel, to add various features and functions. (Pica8’s PICOS runs an unmodified Linux kernel to enable just this type of use.) Walmart used eBPF to control the number of concurrent connections coming in and effectively manage them, to deliver a good customer experience without crashing the network. She also made reference to eBPF-based technologies for deployment of network functions and observability.

“We are in the early phase of figuring out how to give back what we have done with eBPF to the developer community,” Tatavarti said. In terms of the open source community, “We hope we can become bigger partners and play a bigger role going forward.”

Well Walmart, representing Pica8, the company that delivered the first open, Linux-based NOS in 2012, let me say welcome aboard.

If you want to learn more about what open, disaggregated white/brite box networking can do for your network, check out our white paper, “An Enterprise Approach to White Box Networking.”