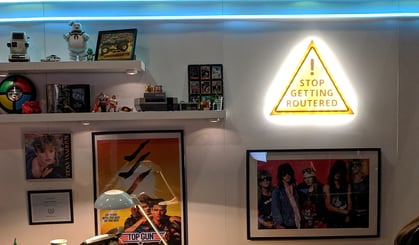 At Pica8 we’ve long made it clear that our PICOS network operating system is based on Linux, but we perhaps haven’t been as clear about why that’s important and the benefits it brings.

In this post, my aim is to fix that by laying out how disaggregated Linux makes upgrades easier, enables users to customize the NOS to their liking and fosters automation. It also allows customers to respond to events like Covid-19 much more quickly, which is why legacy-laden banks are struggling to adapt to new realities of 2020 while FinTech is taking off.

Linux is by nature compartmentalized; you can update one component without having to touch the rest of it. When applied to a NOS that has significant implications.

Traditionally, upgrading NOS software is an involved, time-consuming and potentially disruptive process. You need to put the NOS in a lab and go through myriad tests to make sure the new software doesn’t have any unintended adverse effects.

With Linux, that quality-assurance cycle is greatly simplified. Let’s say you want to apply a security patch. That will apply only to one module of the NOS code; it has nothing to do with data handling modules, so there’s no need to test them, perform QA analysis and so forth. It adds up to less work for your network operations team and, quite likely, reduced network downtime.

The compartmentalized nature of Linux offers another benefit: it means you can dedicate a partition for any tools you want to install.

For example, it’s simple to put an agent on a Linux-based switch to perform functions such as data collection and network performance monitoring. The agents may run tests between end points and feed data to an upstream performance monitoring tool, such as Ixia’s Hawkeye or a cloud-based configuration and management tool. Customers have also been known to install a DHCP server directly on their switches.

Here again, anything you put in that partition dedicated for user software won’t be touched when you update the NOS software.

Linux also supports the Python environment, which means you can run scripts on your switches to automate various tasks. Some network event could be set to trigger a change to a switch configuration, for example; that reset could easily be automated in a Python script that runs directly on the open networking switch.

In that regard, Python scripts could complement the open-source Ansible automation framework. Originally, Ansible was designed as a Linux server automation platform, and, as a result, most servers today offer a Python environment to run scripts on. Today, Ansible has been extended to address network automation as well, which is great, only most network devices don’t have a Python environment on which to execute scripts – except those running a Linux-based NOS.

In Pica8’s case, Ansible-based scripts can also be combined with the GUI-controlled automation capabilities provided by AmpCon, our automation framework for large-scale enterprise networks, that addresses tasks like switch deployment and configuration for large numbers of open, white/brite box switches.

So, how does all this relate to Covid-19? Simple. It illustrates an intrinsic value proposition that disaggregated Linux open networking solutions have over their legacy networking forebearers. In a matter of weeks starting around March 10 of this year, the work and motion patterns of the world’s data flows reversed. The compute and networking resources that were once in our office buildings are now on the other side of the network edge, in our homes. (A full post examining this topic will follow shortly.)

These hyper-localized traffic increases have network providers around the globe scrambling to upgrade and reconfigure their infrastructure. If they had a disaggregated Linux NOS running the access networks at the enterprise edge, they could simply purchase higher-capacity switch hardware to handle the increase in video conferencing and expand currently saturated corporate VPN tunnels. The software stays the same.

Unfortunately, the vast majority of legacy access networks at the edge are old– really old– which is why, as I stated up front, many banks are struggling in this new environment while their more modern FinTech competitors are generally having a much easier time of it.

To learn more about the benefits to be had from operating an open, Linux-based NOS like PICOS in a modern, disaggregated campus and access network, you can download our white paper, “Simplifying Network Operations through Automation and Open Networking."  It puts you in the shoes of network administrators, to give a sense of the day-to-day operational benefits to be had from running automated, open networks.

“An Enterprise Approach to White Box Networking,” provides an overview of how white box networking applies to the enterprise, from greater reliability and performance to lower TCO.