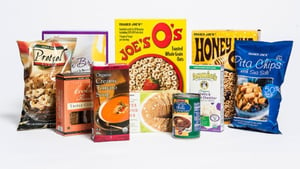 2018 is a particularly good time to be in the disaggregated networking business. Truth is, it’s never been better – either for the vendors or for the enterprise network managers themselves. The market for network innovation has finally sorted itself out after a long wander through the desert of academic SDN piety, and the hardware that disaggregated Linux-based NOS software runs on is now world class – same ASICs and hardware the legacy guys use, probably even the same power cords if you look close enough.

So where does Trader Joe’s – a highly successful retail food store innovator in the US – possibly come into this equation? Two words: value proposition. While white box NOS vendors like Pica8 did not deliberately set out to emulate the basic business values of Trader Joe’s, it turns out that, well, we basically did.  The mapping is eerily similar.

A focus on service and responsiveness? Double check.

Using the same product sources as their larger competitors but without brand-name labels? Triple check.

And, finally, having absolutely everything you need to make a great meal/network without burying you under unnecessary options that make your head spin? Quadruple check.

(I mean, really, who needs to scrutinize the labels of 17 varieties of tomato soup at a Safeway before making a purchase decision – and, on the flip side, who needs to slog through a few thousand legacy RFC configuration options that will never be used?)

Customers have responded well to these shared value propositions, to the point, on our side, that modern white box networks are now a proven, viable alternative to legacy network infrastructure offerings from vendors like Cisco and Arista.

Don’t believe me? White box networking software vendors, like us, collectively have thousands of customers, including some of the biggest companies in the world.

Seems our industry quietly moved past the early-adopter stage quite some time ago in spite of the barrage of Fake News – “It’s not ready for prime time” – that continues to roil the industry from time to time.

But perhaps the most telling parallel between Trader Joe’s and, in this case, explicitly Pica8’s enterprise white box offering, is that customers find the two of us almost exclusively by word of mouth.  Trader Joe’s is quite famous for never doing advertising, yet their business growth continues to be the envy of their industry. We’re nowhere near that level yet, obviously, but we’re the largest Linux white box NOS vendor in terms of number of customers and have grown our business year-on-year since 2012 without having had so much as a single salesperson in the company.  (In full disclosure, we recently hired a couple of them.)

Also, again like Trader Joe’s, Pica8 is growing its enterprise customer base almost exclusively at the expense of existing competitors, which isn’t surprising since Cisco (Safeway) owns around 90 percent of the enterprise install base according to most industry analysts. Piggly Wiggly (Juniper) shows up occasionally, but in both cases the maturity and value propositions inherent in mainstream white box networking solutions are looking more Trader Joe’s-like by the day.