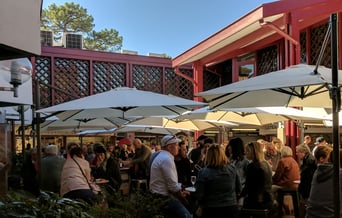 Analyst Groups (he said in his best John Oliver “Last Week Tonight” snarky intro voice.). They’re like the ultimate tool with the poisoned handle for corporate marketing types. Hold them just right and they can be remarkably useful. But hold them wrong. . .

Pica8 recently spent a fair bit of time and effort contributing to a new, just-out report from the Forrester Group called “The Forrester Wave™: Open, Programmable Switches for a Business-wide SDN.” Totally right down our alley as we invented the whole “Linux NOS plus SDN on a white box switch” thing in the first place and we’re having great fun watching our vision become market reality. It was written by a great analyst, one that I have known for a very long time, and I would really like to tell you what Forrester says.

Seriously, I just can’t. Not a paying client, you see. Nor in these COVID-constrained times do I possess a slush fund sizable enough to pay for hundreds of pricey reprints when I probably only really need, what, 10? I mean, who does mail anymore anyway?

What I am “allowed” to tell you is that Pica8 is in the report, but that’s it. No context. It’s like when I was on a murder trial jury in downtown LA in the 80’s and a single, unfired bullet was entered into evidence. “Here’s an important piece of evidence. We can’t tell you why it’s important, who found it, whose bullet it is, or even where it was found or why you need to see it. But you do.” (I’m still bothered by this to this day, particularly as we found the defendant guilty, though of a lesser charge.)

Anyway, you are more than welcome to go to the Forrester site and read the report for yourself (if you’re a client), or, keeping in mind that “Loose Lips Sink Ships,” go ahead and PM me – jeff.paine@pica8.com – for more details.

But, just to make it perfectly clear to Forrester that I’m not singling them out in any way, I’d also like to ask the following question: Can we all agree to give Gartner a big, industry-mandated “Time Out” and send all their analysts to their respective rooms without supper for the next 6-12 months?

The Acronym Police must have been on a beer break when Gartner recently magicked up SASE. Or has the once-venerable firm simply been overrun by a hoard of Millennials who simply don’t understand that to anyone over the age of 40 SASE means Self-Addressed Stamped Envelope, not Secure Access Service Edge. (And please, don’t tell me that it’s pronounced “sassy.”  That’s just way too precious for words.)

From a Gartner business perspective I absolutely get the creation myth around SASE, and that of its networking wave-your-hands-around-in-the-air-really-fast precursor, Intent-based Networking (IBN). If you’ve built much of your reputation by turning out technology quad charts and hype cycle graphs, you then, I suppose, have a built-in moral imperative to keep them filled when the constituent players – start-ups and large tech companies alike – are no longer out there creating new ones fast enough for you. So, Gartner decided to start rolling their own. (Sadly, this type of creative structured fog is likely to become even more common as VCs increasingly run out of things to monetize that are already out there somewhere, but there’s a hype cycle that needs feeding.)

IBN now has at least 100 different meanings and has helped birth expensive software suites, like Cisco’s Stealthwatch, which is required for Cisco DNA Center if you want “IBN.” While Gartner’s IBN is bad enough, the SASE concept is so intangible that when Juniper announced its SASE “launch” earlier this month, the company’s VP of Security, Business, and Strategy actually felt compelled to say out loud, “It’s more than just marketing.”

He then went on to say the Juniper SASE solution “accommodates customers wherever they are in their digital transformation journey,” which, to me, sounds suspiciously like a strategy concocted during a company marketing off-site at a Sedona New Age power point.

Don’t get me wrong. Many of the individual pieces of SASE are just dandy – and quite useful. But all the proprietary vendors like Cisco, Juniper and Arista – as well as other new July-only SASE “announcers” like Fortinet and Forcepoint – have shown time-and-time again that they are, first and foremost, looking after their own interests, not their customers.

So, when at the end of their SASE launch Juniper closed with, “It’s best delivered by a single vendor,” you can rest assured that the correct translation of that phrase is “our shackles won’t hurt you quite as much as the ones you’re currently wearing.”

This is why disaggregated open networking at the access edge has taken over as the new best practice for modernizing enterprise networks. It has already replaced thousands and thousands of legacy big-iron access switches, with no hint of vendor lockdown or built-in hardware obsolescence.

Maybe it’s time for an Open Networking Manifesto for the Enterprise.