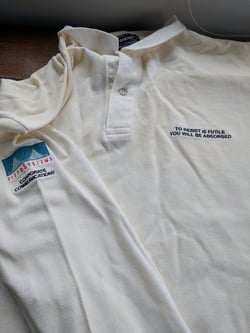 Of all the tools in its ginormous account-control arsenal, Cisco holds solution “complexity” near and dear to its heart.  Since its earliest days, Cisco has weaponized product complexity and applied it to pretty much everything from product design, to sales, and even to service and support.  Examples abound, but let’s just take a peek into the product side first, and then look in on the origin story for the CCIE (Cisco Certified Internetwork Expert) program, which has been so massively successful it’s now become a nice little earner for Cisco – generating about $150M to date – in and of itself.

Before we start, it should be noted that complexity is – warning, BGO (Blinding Glimpse of the Obvious) ahead -- the last thing Cisco customers are actually looking for, if for no other reason that there simply aren’t enough top-flight network engineers in this life-cycle for them to hire at any price. Cisco, however -- very much the prisoner of its own business model -- purposefully soldiers on.

On the product side, back in the day when Cisco had a relatively strong competitor in the form of Wellfleet, the two companies, which had zero love lost between them, took different approaches to configuring and running their systems.  Cisco focused on its detailed CLI for programming and configuring its routers, while Wellfleet, correctly assuming less-sophisticated network personnel were far more common, largely went with a menu-based UI.  Cisco did receive pressure from prospects and customers who were familiar with Wellfleet to provide something similar to its UI in lieu of – or in addition to -- the Cisco CLI, but, rather than listening to customers, Cisco doubled down on making its relatively complex feature set even more complicated.

To do this, Cisco pushed hard on the versatility of its solution. “Here, let us show you how to use our CLI and features to work around a dozen networking edge cases that you’ll probably never encounter in real life, but, hey, you never know, and we get to show off a bit.” Cisco’s engineers were the best in the business at the time, and the capabilities and feature sets they constructed just kept adding up, until, today, some of the company’s code bases, according to Gartner, can now approach 30 million lines.  Unfortunately, for the average Cisco customer, not only is most of this code of little or no use – think networking “junk DNA” that’s not fit for purpose for most – it contributes to overall system price, bloat, and instability.

In pushing its Conservation of Complexity doctrine in every customer meeting, Cisco stumbled on a gold mine by appealing directly to the egos of its network engineering “peers” in the enterprise, many of whom, coming from IBM-land, were still learning what a router was.  The basic argument was simple: “If you are smart enough to master our uber-complex proprietary technology, then you’ll be on a faster career track than the engineer in the cube next to you who hasn’t done it.” And, of course, once a customer was “invested” in, literally, Cisco-speak, it created a largely insurmountable obstacle for Wellfleet et al.

After a series of hallway discussions that often started with something like “Hey, maybe we should give out actual certificates or something to hang on cube walls,” this was all formalized in 1993 with the birth of the CCIE program.  And the ego-fawning was off the charts. They’ve stopped it now, but, in addition to framed certificates, Cisco used to hand out leather Cisco Top Gun bomber jackets for graduates to strut around in.

Deliberately difficult and complex by design, the CCIE program has now expanded to a whopping seven tracks and minted nearly 60,000 certificates since its inception – that’s more than 6 per day for 25 years.  To further leverage the program as an account-control tool, Cisco later started publishing mandatory numbers of CCIE employees that partners had to employ in order to achieve “gold” or “platinum” status with the company.

For example, using Pica8’s new, customizable AmpConTM automation framework software – the open networking alternative to Cisco DNA Center – IT personnel with no programming skills whatsoever can now reliably deploy, configure and manage network switches.  This can be done from a simple GUI because Pica8, unlike some open networking software companies, does not require enterprise networking teams to suddenly add “Linux gurus” to its list of job-skill requirements.

Using the port aggregation capabilities of PicaPilotProTM, which is built into Pica8’s flagship PICOS OS, dozens of open white box/brite box switches can now be managed as a single IP address, greatly simplifying ongoing network operations. Additionally, failed hardware switches are easily replaced by any SysAdmin; no more Level 3 network engineers required. With PicaPilotPro you can implement a simplified leaf-spine architecture to replace the traditional (and currently overly complex) three-tier network structure.  Oh, and PICOS typically runs on all the latest open networking campus and access switches from companies like Dell EMC.

As the majority of the coursework for CCIE certification applies to the art of networking itself, there remains a great deal of value in the program and the program’s various offspring -- CCNA, CCNP and so on.  It’s only the Cisco-specific parts that are increasingly called into question -- because the world is clearly moving on. Open networking is already crushing it in the data center because the business model is just that much more compelling. It’s clear the open networking avalanche is also well underway in large enterprises around the globe now that automation and switch stack/chassis switch alternatives make it possible to construct an entire enterprise network using ON technology.

While Cisco continues to peddle complexity to lock in its customers, Pica8 is on an antithetical mission to radically reduce the level of complexity and attending expertise needed to run a modern enterprise network. What’s more, our solutions are rolling out in the production networks of Fortune 50 companies as we speak, and we’d love to show you just how much simpler life can be with Pica8 as your open networking partner. We encourage you to download our new white paper, “An Enterprise Approach to White Box Networking,” to learn more about how much simpler networking can be.