Why Cisco’s Nostalgia-based Networking is Now a Major Liability 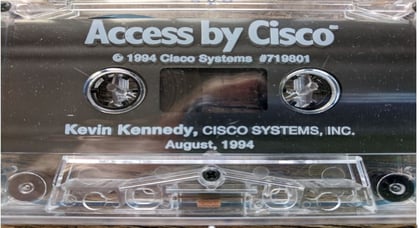 Depending on what part of the world you sit in, starting in early March your enterprise access network changed polarity overnight. A huge percentage of the potent network and compute resources that had been carefully installed in your corporate buildings were suddenly outside of your network, largely in employee homes. Now traffic was fighting to get in.

Video traffic suddenly spiked, saturating the demand for corporate VPN tunnels, while a few hours of typical peak traffic erupted into half-a-day’s-worth — or more. And on the receiving end of all of this — in far too many enterprises to count — were really, really old wiring closets full of Cisco access switches that hadn’t been touched since Y2K was a thing. So, how do you respond to all of this while trying to secure a suddenly mobile workforce when your edge switches depreciated years ago, run on old firmware, and have a spotty — at best — reputation for security?

Last year, when access edge issues were largely centered around a bit of IoT sprinkled with some specialized app deployment, replacing old Cisco 90’s access switching technology wasn’t in anyone’s critical path. But CTR — COVID Traffic Reversal — has compressed years’ worth of normal edge network evolution into a couple of very stressful months. Add to this the fact that consolidation at the edge was already kicking in and that WiFi 6 is a compelling upgrade event in and of itself, then access network refreshes are now — or should be — top of mind.

We only have to look at the banking and financial services industries to see how this plays out. In general, traditional banks have much older legacy network access infrastructure than their more modern FinServ counterparts, so it’s the FinServ companies that have been far outperforming the banks in terms of network agility and ability to respond to the issues brought about by CTR. Why? In part because the FinServ sector is much farther along the adoption curve of white/brite box open networking than their more conservative banking brethren. For example, one of the largest FinServ’s has already replaced over 2,000 Cisco campus and access switches with brite box open switches and a Linux NOS and has had zero failures in over a year of operation.

Of course, you’re always free to replace an old Cisco access network with a new Cisco access network, but, candidly, why would you? In the old days, Cisco gear was innovative and often a cut above the competition. But now? Open up a — very expensive — Cisco switch and there’s literally nothing special inside. There’s no engineering reason to go down that path. In fact, the engineering argument for an access network refresh favors the open networking vendors riding the commodity ASICs development curve, which are leaving monolithic switch vendors like Cisco and Juniper in the dust. Say, for example, you already had an access network of open switches installed when, CTR upended your network in March. If you then wanted to boost your uplinks back to the campus from 1G to 10G as part of your response, that’s a simple, inexpensive 1RU hardware-only swap-out in open network white-box-switch land.

Or, perhaps as part of your upgrade you might want to quickly move to WiFi 6 and front them with a modern, 1RU SD-WAN box in lieu of your now-inadequate edge router and static wiring closet switches. Using open networking hardware and software from Dell Technologies and Pica8, for example, in a total of 2RUs you can have Multigig, half-duplex, 48-ports of 90w power over Ethernet (PoE) to power the WiFi 6 access points and a secure WAN edge that includes routing and a next-gen firewall.

So, if Cisco access networks lack any meaningful technical/security/reliability “edge,” sport built-in hardware obsolescence, and carry the tear-inducing cost structure of an uber-premium luxury-goods brand, then what’s left? Basically, we’re left with what can best be described as Nostalgia-based Networking for the enterprise.

As Cisco’s very first marketing hire, who created the router icon, the iOS brand, and even the “Access-by-Cisco” program itself, I totally get it. It’s a proven and comfortable brand. One that once stood for innovation and even carried a certain industry/career cachet, largely stemming from its over-achieving CCIE program. [See my earlier post on this topic.]

But Cisco — lacking historical software DNA as a company — clearly struggles with the rapid evolution of customer use cases at the edge today. In stark contrast, disaggregated open networking Linux NOS vendors like Pica8 are built for this world and routinely customize their NOS’s to handle specific application use cases for their large enterprise customers as part of their basic business model, something the monolithic Cisco’s of the world simply cannot do with their glacial development cycles.

Also, open networking offers its users a massive ecosystem of powerful Linux-based open source tools for comprehensive network management, monitoring, analytics and so on. Cisco’s “counter” to this ecosystem comes packaged as a set of very powerful, very complex, and stratospherically expensive software offerings like DNA Center and StealthWatch (a requirement for Cisco’s Intent-based Networking). Just picking on StealthWatch for a moment, if you have a network with 100,000 flows, that will set you back $600K, plus appliances for it at $43K-$120K, plus a management console that runs between $59K and $120K, and these numbers do not include replicators, sensors, or training. And that’s just for one of the tools you would need.

You get the idea. Inexpensive, quick to deploy, simple to run, and fully automated open networking refresh solutions are simply the new best practice for CTR-accelerated access network upgrades.

To learn more about the benefits to be had from operating an open, Linux-based NOS like PICOS in a modern, disaggregated campus and access network, you can download our white paper, “Simplifying Network Operations through Automation and Open Networking." It puts you in the shoes of network administrators, to give a sense of the day-to-day operational benefits to be had from running automated, open networks.