Like Watching the Caveman Invent the Rock – Cisco “Discovers” Software 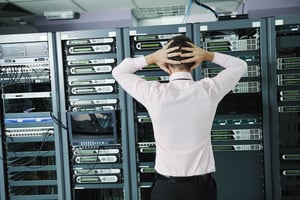 In truth, today’s legacy enterprise networks -- many now decades overdue for replacement -- were built to fight Cold Wars among the vendor powers.  Cisco “big iron” battled Wellfleet “big iron” and, later, Juniper “big iron,” and the throughput/density contests are now the stuff of NetOps legend.  But these aging networks are completely ill-suited to fight today’s data-oriented guerilla warfare, where hackers, DevOps, IoT, mobile, open source, and cloud services clamor for attention and have NetOps IT people desperately trying to manage an environment that feels more like a third-world airport terminal flooded with people fleeing a coup than a predictable business utility.

To be fair, Cisco was able to successfully weaponize account control far better than Juniper, Extreme, et al, so they ended up “winning” – and keeping -- the large enterprise business to the tune of some 80 percent market share.  But this business stranglehold can no longer be defended by the moral equivalent of a proprietary Maginot Line.  The new name of the networking guerilla warfare game is software.  The new “best practice?” -- disaggregated Linux-based open white box switching with a full enterprise feature set – one that is future-proofed with concurrent support -- a Pica8 exclusive -- for both L2/L3 and SDN.

Cisco is, unsurprisingly, conflicted about what to do here.  First, they simply tried ignoring software by doubling down on account control, but that just alienated many of their long-time enterprise customers even further, motivating them even more to move to modern, efficient and future-proofed alternatives like Pica8’s.  In fact, high up the list of reasons we see in over half of our enterprise customers’ rationale to RWOC (Refresh WithOut Cisco) is the bullet point, “annoying salespeople.”  These days it seems that Cisco sales reps are about as welcome in their big accounts as a herd of caffeine-deprived hipsters riding up on electric scooters.

Why is that?  Well, Cisco used to be known as “the masters of firmware.” Firmware was – and still is – the company’s true core competence when it comes to implementing networking functionality. The first time Cisco went off-piste and tried developing real networking-related software for itself was back in the very early days of SNMP, when the company built its own software platform called NetCentral Station to compete against the likes of HP OpenView.  A show of hands of people who even remember this solution? (Or that Cisco was ever even in this market?)

Closer to home – and closer in time – Cisco has dipped its toes in the water a couple of times in terms of software that is more directly relevant to its core product lines with efforts like ACI (Application-Centric Infrastructure) and its latest damp digit, intent-based-networking, but these efforts have all been carefully measured by Cisco against any potential negative impact on the company’s gross-margin-per-port business model, which is scrupulously tracked by Wall Street for any sign of weakness.  ACI, for example, is basically a proprietary knock-off of some of what SDN brings to the table, but is wholly dependent on heavy Cisco iron to run, so no business model jeopardy here. In the industry, ACI is now increasingly referred to as All Cisco Inside. (Cisco really should have seen that one coming.)

Now, with its intent-based networking “software” story, Cisco has, once again, neatly cribbed a subset of the SDN value proposition to apply to its expensive and proprietary new hardware, hoping to lock in customers for yet another hardware upgrade cycle.  This less-than-subtle strategy is actually highlighted in the company’s latest quarterly results, where Cisco was over the moon about how many new Catalyst 9Ks they had sold via intent-based networking, not by how much software it had sold.  (It’s the ports, stupid!)

To their credit, Cisco’s new executive team has gone on record as saying that they would dearly love to look more like a software company in the future, but that they are still struggling with “reducing the operating costs of selling software.”  Right.  But the prism Cisco is looking through here exists only in its own mind’s dark theater and ignores what its customers are actually looking for in this upgrade cycle -- ease of use, simplification, flexibility, scalability, future-proofing, and, if possible, no more hipsters – Cisco has over 16,000 of them -- on scooters.

With well over 800,000 total customers, Cisco is in absolutely no existential danger, but the law of big numbers has clearly caught up with them.  Early adopters of Cisco that moved away from IBM in the late 80’s are now increasingly “early adopting” away elsewhere with companies like Pica8 – companies that embody all of the desirable qualities that Cisco once had when it was young – innovative solutions that allow for real industry-segment differentiation; fanatical, concierge-like customer support; bug fixes that work; and a viable exit strategy to escape a stifling single-vendor hegemony.

We have all, literally, seen this movie before.

(The Cisco Chronicles. Vol.1, No.2. An occasional series of musings relating in some way to the early days of networking when vampire taps were still a thing (by Cisco employee #78).