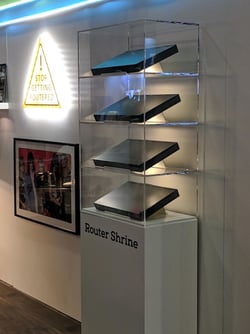 Over thirty years ago – ouch -- I joined Cisco as its very first marketing hire, tasked with giving them a more professional image than “Stanford grad students run amok” in preparation for their IPO. But during my six-year posting, I also got to witness Cisco’s first attempt to build an actual software solution, a now long-forgotten SNMP management platform called NetCentral Station. After throwing significant R&D and marketing capital at NetCentral Station over the next year or so, Cisco threw in the towel.  As its product manager prophetically told me in the end days, “We should never have entered a business we know nothing about.”

A decade later her words remained prescient.  Then I was working for a small startup comprising networking software developers who had previously been acquired by Cisco for quite a high valuation because of their VoIP expertise.  Cisco followed good business practices – in their view -- and locked down the founders for three years by detailing an extensive scope of work for software development that they had to complete before they would be allowed to leave the company.

You can see where this is going, right?

Three months later they walked out the door, having fulfilled their development commitment and laughing all the way to the bank.  In this case, Cisco’s ability to understand software coding effort had been off by about a factor of 10.

And today?  Well, sidestepping the eternal argument about the actual status of its Application Centric Infrastructure (ACI), Cisco, stubbornly, insists on being the last man standing, soldiering on, even continuing to build its own software for embedded systems at times.  Just let that sink in for a minute.  Show of hands for anyone reading this who’s still coding their own schedulers and memory writes?  Contrast this with IBM, a company that had to confront very similar market transition issues, but ultimately elected to -- painfully -- bite the bullet and exit the hardware business in order to reinvent themselves as a competitive software and services solutions provider.

As a company, Cisco is clearly awash with great networking talent and ideas, but, at its core, it is still overly dependent on heavy-iron solutions that were designed to fight a Cold War between large networking-vendor powers.  In contrast, Pica8 today is a fast, agile, open networking software solution vendor that has broken free from its industry’s “NOS-on-a-Box” origins to become full-on network solution provider, finally giving enterprises a commercially viable – and financially compelling -- alternative to the “ancients.”  Now, an insanely easy to use, fully automated, centrally managed end-to-end campus network can be crafted whole cloth from modern white-and brite-box switching hardware from trusted companies like Dell EMC.  At Pica8, we have a name for our new open networking enterprise solution architecture -- “ThresholdTM – and its powerful simplicity stands in stark contrast to Cisco’s equivalent offerings.  (Check out a discussion about this at minute mark 13:28 in this recent PacketPushers podcast for another view: https://packetpushers.net/podcast/network-break-260-pica8-launches-campus-automation-framework-vmware-adds-ips-to-nsx/)

With campus competition heating up, it certainly appears that Cisco is trying to extricate itself from its core competency in networking hardware and find replacement revenue in networking software, taking a kind of shock-and-awe software-sticker-shock approach to the effort. For example, if an enterprise wanted to deploy 100 Cisco access switches using Cisco’s DNA Center software solution as the automation framework for switch deployment and ongoing management, the minimum list price for this, not including switch hardware, would be well north of $200,000.  Contrast this with the comparable Pica8 solution, AmpConTM, which carries a list price of $10 per switch per year, or, $1,000 for those same 100 switches.  Sometimes math is alarmingly easy, and, fortunately for us, Cisco’s enterprise customers tend to be very, very good at math.

In an oblique way, Cisco’s recent announcement about collapsing its data center and enterprise business units into a single entity can be viewed as an acknowledgement that white-box disaggregated switching has already won the data center networking war.  Every single one of the top cloud networks have adopted white box switching.  Now, just as in the data center, there’s a full-on open networking software solution for a 100% white-box campus network.  Enterprises around the globe need to ask, do I really need to keep paying these increasingly inflated Cisco prices where I end up with the same network as my competitors?

Looking at it from a distance – perhaps from as far away as Mars? -- the advantages to being a pure software solution play riding atop efficient open switch hardware in the rapidly evolving enterprise networking market appear almost endless.