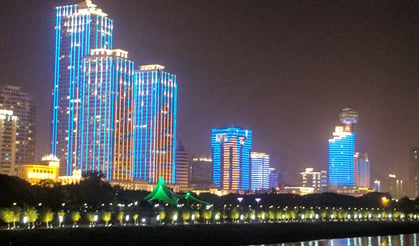 The digital transformation that nearly every enterprise is currently undergoing is putting tremendous pressure on edge networks, with companies struggling to keep up with rapid growth. In turn, this is forcing enterprises to make a fundamental choice: continue to invest with their incumbent switch/router vendors, at increasingly inflated prices, or investigate alternatives, including networks built with open, white/brite box switches, the current choice for all the webscale data center providers.

Lots of action at the edge
Numbers paint a clear picture. By 2024, the edge computing market is expected to be valued at $6.96 billion, up from $1.27 billion in 2018 – a compound annual growth rate of 34%. The growth is driven by the confluence of Internet of Things (IoT) applications, artificial intelligence, machine learning and other applications that require both significant processing power and low latency – hence the need for localized compute and storage resources.

IoT, in particular, is behind much of the current growth of data at the edge. A Forrester Consulting study commissioned by Dell Technologies and VMware found many firms are adopting a decentralized strategy for edge IoT analytics applications because cloud-based strategies can’t keep up with the amount of data being generated at the edge. Among the top reasons for adopting an edge-based approach were:

Edge switch upgrade challenges
For enterprise network teams, this all adds up to more traffic at the edge, centered on campus networks at switches closest to end users. As a result, companies are being forced to upgrade hundreds – sometimes thousands – of edge switches to accommodate the increase in traffic.

That presents problems on at least two fronts. First, it’s a given that most companies don’t have enough experienced network engineers and technicians available to install and configure all those new switches – never mind manage them over time.

Second is the expense and complexity involved in buying a slew of new switches from incumbent vendors. Edge switches are (or should be) relatively simple devices. They typically don’t need the kind of feature-rich (read: bloated) network operating system typical of the Ciscos of the world. But if you’re going to stick with the status quo, that’s what you get – along with a hefty bill (and built-in obsolescence).

Wanted: Simple, automated networks for the edge
What the edge onslaught calls for is a fresh approach that emphasizes simplicity and ease of use. That means networks that are easier to deploy and manage, and thus reduce operating costs because they require fewer network personnel. In other words, what’s required is network automation tools.

Over the course of the past year, that’s what Pica8 has been at work on delivering. The result is AmpConTM, our new network automation framework. Short for amplified control, AmpCon brings the concept of automated, zero-touch deployment to enterprise edge switch deployment and configuration, as well as to ongoing operations and management. Think of it as a lightweight, easier to learn and use Cisco DNA Center type of solution that we are – almost – giving away. You could pay Cisco hundreds of thousands of dollars more but, honestly, why would you?

AmpCon is a first for the open, white box network market and it brings significant change for the better to the network teams responsible for the day-to-day management of enterprise campus networks. To help you get a sense for the type of change AmpCon offers,  , “Simplifying Network Operations through Automation and Open Networking.”

I think you’ll find it’s an approach that really does enable you to “do more with less,” and at a price that any enterprise can readily afford.

To help you get a sense for the type of change AmpCon offers, download our new white paper, “Simplifying Network Operations through Automation and Open Networking.”